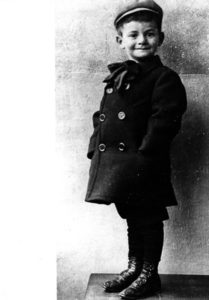 © Erwin by his uncle Carl

“Once upon a time, far too long ago…a cabbie was trotting my parents-to-be from Berlin’s  Royal Opera House in Unter den Linden to their apartment in Wilhelmstrasse. They were having an animated row behind the drawn blinds of the hackney.

Whatever the precise details, on 5 May 1896, at the midnight hour, I was unceremoniously thrust into my first concentration camps. Doubled up and tethered in solitary confinement for nine months and condemned to death under the most inhumane living conditions, I began learning how to die.” 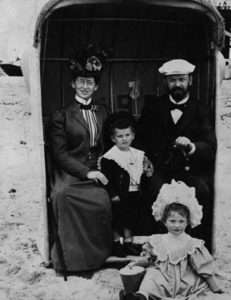 Blumenfeld family at the sea at Ahlbeck © Unknown, 1900

” Thus on 26 January 1897, a Thursday morning I shall never forget, half-squashed, speechless, at the end of my tether, stark naked and sincerely yours, I was sent out into the fresh air.  They thought I ought to breathe so they slapped me on the back. What I inhaled was the carbolic enriched stench of Lysol gutter-blended with the steam of fresh horse droppings-the celebrated Berlin air.” 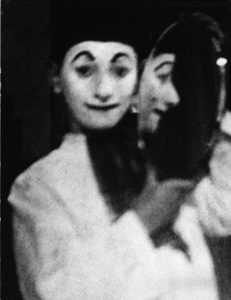 Autoportrait in the mirror © Erwin Blumenfeld

Erwin receives his first camera from his uncle Carl after bravely surviving an operation for a pretended appendicitis:

“My real life started with the discovery of chemical magic, the play of light and shade, the two edged problem of negative and positive. I had a good photographer’s eye right from the start.” 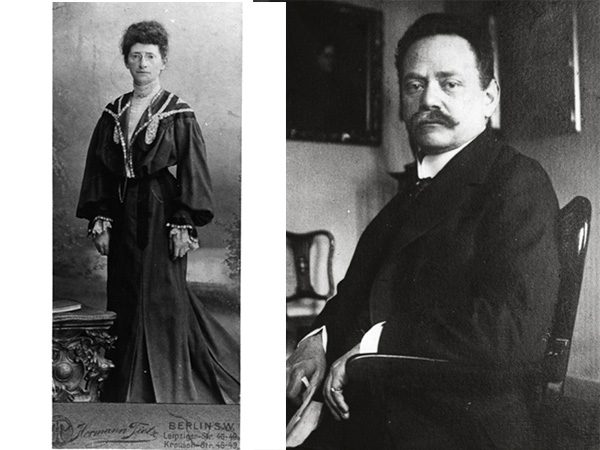 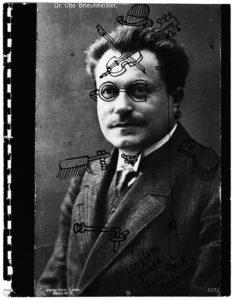 Attends assiduously the Cafe des Westens in Berlin with his friends Paul Citroen and Walter Mehring and befriends the artist Georg Grosz: ”One night, it must have been around 1915, I went in mellow mood to the urinal on Potsdamerplatz. A young dandy came in by the opposite entrance, stood beside me, fixed his monocle in his eye and in one fell swoop pissed my profile on the wall so masterfully that I could not but cry out in admiration. We became friends. He was the most brilliant man I ever met in all my life, a great raconteur and an immensely powerful draughtsman.”
At the same time Erwin starts a correspondence with Paul Citroen’s cousin Lena Citroen, “Leentje” who lives in Amsterdam. 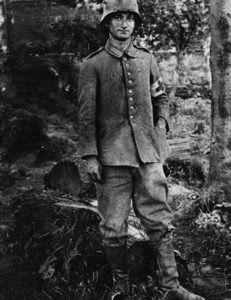 Erwin in the army © Unknown

Incorporated in the German army as ambulance driver, he is sent to France after a hellish training period in Zwickau. He collects mostly corpses in his ambulance, but also serves as an army brothel bookkeeper. While on leave in June 1918, he plans to desert with Lena to Holland but is reported to the army by his uncle Bruno. His brother Heinz, incorporated in 1918, dies on the French front: “Dear Brother,
Back in Flanders. Just spending a day or two here at the base. A fortnight ago on Thursday, arrested with Lena and put on remand thanks to Uncle Bruno. Lena deported, I was set free on the last day after innocence proven. Mama triumphant. Swears she knows nothing about the whole thing. Mama says,”Better dead in the trenches than a traitor”, because she is scared of aunt Minna.
Hope you’re still alive!
Your brother Erwin.
Three weeks later when they distributed letters, I got this one back with a note written across the address: Killed in battle, return to sender.” 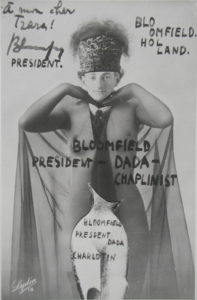 Leaves for Holland. He tries to deal in art with Paul Citroen, but with little success. He enters the garment business, joining the Gerzon Brothers Fashion House.
Participates in the Dada movement with Grosz, Mynona, Mehring and Citroen; paints and writes and does collages under the pseudonym of Jan Bloomfield. Together with Paul Citroen, they are self-proclaimed directors of the “Holland Dadacentrale”. 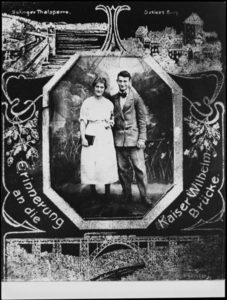 Runs a leather’s goods shop in Amsterdam : the Fox Leather Company (Kalverstraat).
He starts taking photographs, mainly of the shop clientele, but also of family, friends from Berlin and Amsterdam, which he develops in a darkroom that existed in the back of his shop. 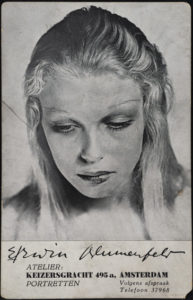 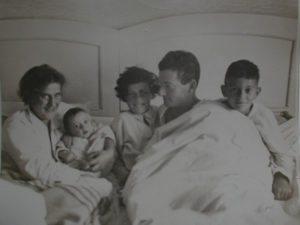 Birth of his children Lisette (1922), Heinz (1925) and Frank Yorick (1932).
The family lives in Zandvoort. Blumenfeld shall never obtain Dutch citizenship as he has been arrested for dropping a shoulder strap of his bathing suit on the beach. 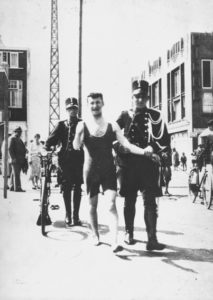 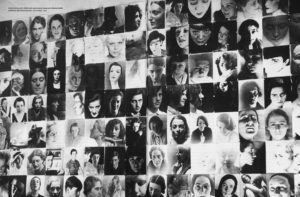 First exhibits of his photographs in Kunstzaal van Lier (Amsterdam) in 1932 and 1934. His first published photograph appears in Arts et Métiers Graphiques, Paris in 1935: the portrait of Tara Twain, from Hollywood.

No longer receiving supplies from Germany, his shop, the Fox leather Company which was already faring poorly, goes bankrupt.
“And so I became when there was really nothing left for me to do, a photographer. Everyone told me not to do it. Failed painters became window-dressers, failed window-dressers became photographers.” 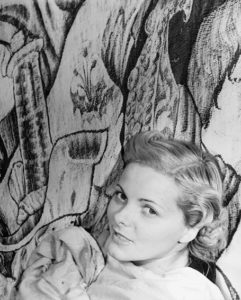 “I fell in love with Paris when I was a child, sight unseen, as is ever my way, and when I finally got there at the age of forty, I realized that taste is merely foretaste. Taste comes from tasting.”

Encouraged by Genevieve Rouault, the daughter of the painter George Rouault, whom he had photographed in Amsterdam, Erwin moves to Paris as a photographer. 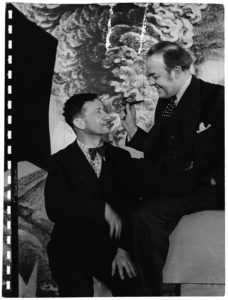 First photographs for the French edition of Vogue thanks to an introduction from Cecil Beaton who admires his work. Works for Michel de Brunhoff the editor in chief of Vogue who tells him: “If only you’d been born a baron and become a homosexual, you’d be the greatest photographer in the world! Only I had already discovered: Le monde n’existe plus.”) 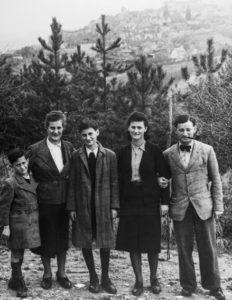 “(…) when the old world collapsed, I was there, playing my own personal part in it all; it was ugly, stupid and life-threatening. It was only a matter of luck that I and my family managed to escape with nothing more than the fright of our lives.”
When the war breaks out in  France in September, Blumenfeld and his family live in Burgundy, in Voutenay-sur-Cure and in Vézelay. In 1940  he is interned as an undesirable alien, at the camps of Montbard-Marmagne, Loriol (Drôme), LeVernet d’Ariège and Catus (Lot).

His daughter Lisette is interned at 18, in the camp of Gurs in the Pyrénées.

When Catus is dismantled, the family lives in Agen and manages to regroup with Lisette. Blumenfeld obtains visas for the family in Marseille from the vice-consul Oliver Hiss. They flee to the U.S.A. in May 1941 on the Mont Viso steamship.

But they are stopped and detained in Morocco, in the port of Casablanca, then in the camp of Sidi-el-Ayachi in July, but finally, thanks to the Hebrew Immigration Aid Society, they can continue the journey on a Portuguese liner, the SS Nyassa to New York, arriving in August 1941. 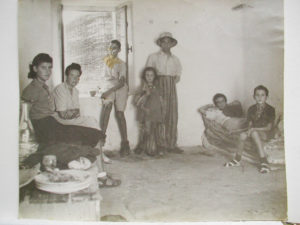 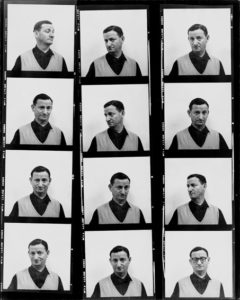 “The metropolis of New York, the only living wonder of the world, is, like the pyramids, not a work of art but a gigantic manifestation of power. It still has one foot in Europe, glancing back over both shoulders on its desperate look-out for new attractions. America only begins where New York ends.”

Blumenfeld starts to immediately to work for Harper’s Bazaar, he shares the studio of photographer Martin Munkacsi. 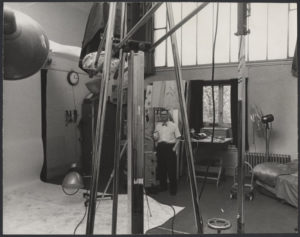 He acquires his own studio at 222 Central Park South in 1943, success comes soon; he becomes one of the best known and best paid fashion photographers. Works for Harper’s Bazaar and Alexey Brodovitch (until 1943), Look, Life, Vogue and Alexander Liberman, Cosmopolitan, Kaleidoscope, Photography, Picture Post, Pageant… producing over 100 covers for fashion and photography magazines in the following years. 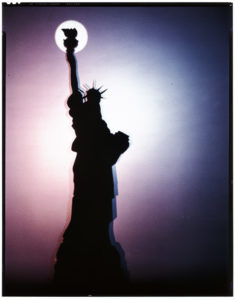 Exhibits in “In and out of focus” curated by Edward Steichen at the Museum of Modern Art and in “Seventeen American Photographers” at the Los Angeles Museum. 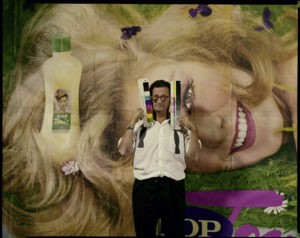 Blumenfeld stops working for Vogue in 1955, he evolves towards advertising, and works for Helena Rubinstein, Elisabeth Arden, L’Oréal, The Dayton Company’s Oval room among many others.
His agent is Kathleen Levy Barnett, later to become his daughter-in-law.

Buys a house in the dunes on Westhampton beach in 1954. It will later disappear in a storm. 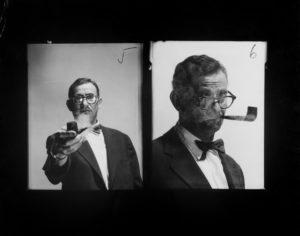 Blumenfeld starts to write his autobiography in German : Einbildungsroman. He will be assisted in this task by Marina Schinz who comes to work for him in 1964.

Birth of his 6 grandchildren : Lisette and Paul Georges have two daughters, Paulette and Yvette, Henry and Kathleen Levy have a son Yorick and a daughter Nadia, Yorick and Helaine Becker have two sons, Remy and Jared.

Composes a Photo book to be called: « My One Hundred Best Photos », 100 black and white images in 50 pairs. Finishes his autobiography.

In an article in Popular Photography (September 1958) Blumenfeld states : “Currently, I am absorbed in magazine and advertising illustration, and I remain as true an amateur as I was at ten. The wonder that the camera can really reproduce anything shown to it still astounds me; and I am strongly determined to show the lens a more exciting, dramatic and beautiful way of presenting life.”

Erwin Blumenfeld dies of a heart attack in Rome on July the 4.

All the quotes in italics in the texts are taken from Blumenfeld’s autobiography Einbildungsroman : “Eye to I” (Thames and Hudson 1999, translation by Mike Mitchell and Brian Murdoch).